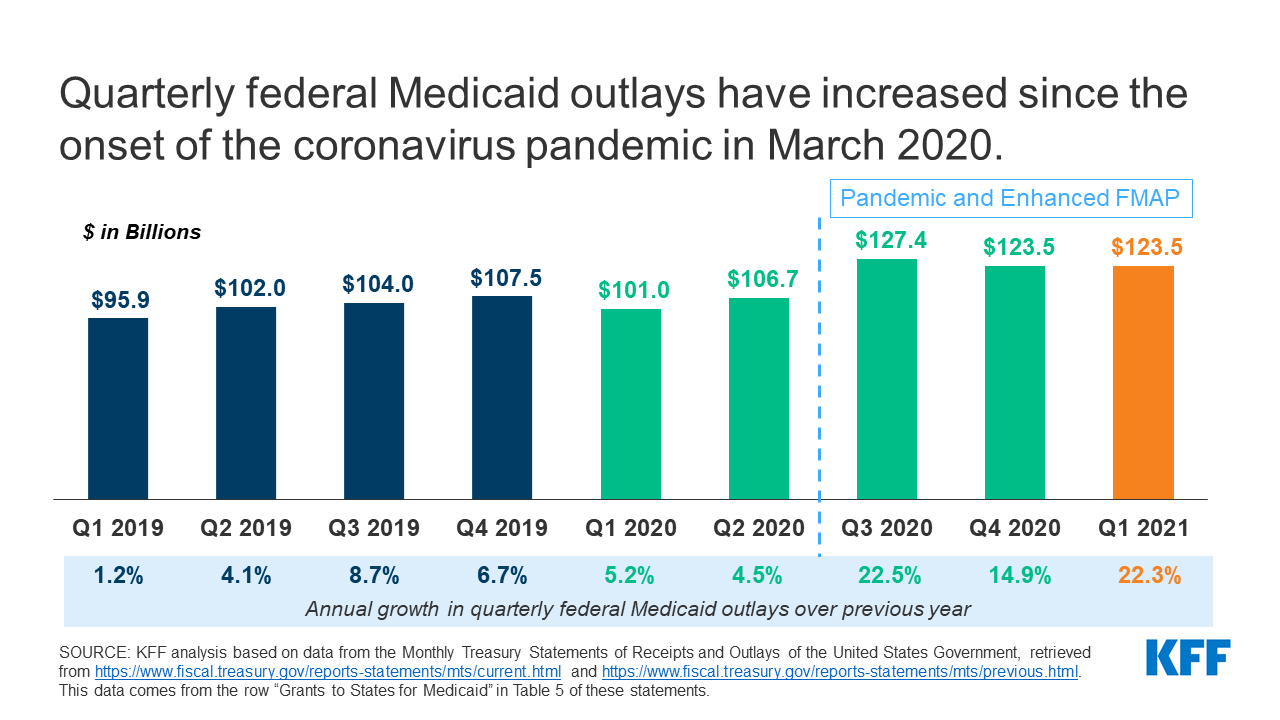 
This data note analyzes federal Medicaid outlays before and during the COVID-19 pandemic. In federal fiscal year 2020 (FFY 2020), federal Medicaid outlays totaled $458 billion and grew at a rate of 12.0% compared to 5.2% in FFY 2019. This increase in the rate of annual outlays was largely attributable to accelerated outlay growth in the second half of the fiscal year reflecting the onset of the pandemic and the beginning of enhanced federal Medicaid funds in late March. Increased federal outlays have continued through the first quarter of FFY 2021.

The outlay data analyzed in this data note comes from The Monthly Treasury Statement of Receipts and Outlays of the United States Government. The Bureau of the Fiscal Service (part of the U.S. Department of the Treasury) publishes these Monthly Treasury Statements, which summarize the financial activities of the U.S. federal government including receipts and outlays of funds. Specifically, this data note analyzes the Treasury data on outlays of the federal government classified as “grants to states for Medicaid.”  This analysis examines quarterly outlays as well as annual total and quarterly growth for FFY 2019, 2020, and 2021 (for which three months of data are available) to understand the implications of the  pandemic and the enhanced federal matching funds. Prior to the pandemic, states reported only incremental changes to Medicaid enrollment and spending, generally driven by rising prescription drug costs, incremental provider rate increases, and, in a small number of states, recent implementation of the Affordable Care Act (ACA) Medicaid expansion. Comparing quarterly outlays in FFY 2020 and FFY 2021 to the prior year allows for a comparison to what may be more typical quarterly variation.

As part of the federal response to the COVID-19 pandemic, states may access enhanced federal Medicaid funds. States and the federal government jointly finance Medicaid. The pandemic has generated both a public health crisis and an economic crisis, with major implications for Medicaid, a countercyclical program. During economic downturns, more people enroll in Medicaid as incomes fall, increasing program spending at the same time state tax revenues may be falling. To both support Medicaid and provide broad fiscal relief as state revenues declined precipitously, the Families First Coronavirus Response Act (FFCRA) authorized a 6.2 percentage point increase in the federal Medicaid match rate (“FMAP”) (retroactive to January 1, 2020) available if states meet certain “maintenance of eligibility” (MOE) requirements. This FMAP increase does not apply to the Affordable Care Act expansion group, for which the federal government already pays 90% of costs. States could draw down the increased federal matching funds beginning at the end of March for claims paid in the first quarter of 2020 and in early April for the second quarter of 2020. The FMAP increase will expire at the end of the quarter in which the public health emergency (PHE).

However, after the onset of the COVID-19 pandemic and the passage of the FFCRA in March 2020, federal Medicaid outlays were higher throughout the second half of FFY 2020 and into FFY 2021. Total outlays in Quarter 3 of FFY 2020 (April through June 2020) were $127.4 billion, an increase of 22.5% over Quarter 3 outlays in the prior year. This increase likely reflects Medicaid claims retroactive to January that were made available at the end of March as well as enhanced matching funds for the second quarter. After this initial spike in outlays immediately following the FMAP increase, outlays in the last quarter of FFY 2020 and first quarter of FFY 2021 ($123.1 billion in each quarter) were lower than Quarter 3 but still significantly higher than the prior year. This trend reflects the continued enhanced federal match as well as increased enrollment due to requirements that states maintain continuous coverage for Medicaid enrollees to access the enhanced match and also to the economic downturn. 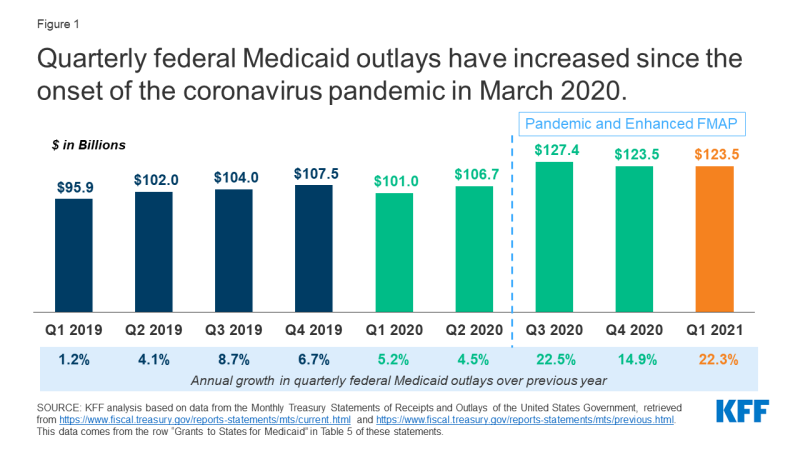 Figure 1: Quarterly federal Medicaid outlays have increased since the onset of the coronavirus pandemic in March 2020.

Continued growth in federal Medicaid outlays into the first quarter of FFY 2021 likely reflects federal matching for increased state Medicaid spending during the pandemic. National data shows an increase in Medicaid enrollment of 8.6% from February to September 2020, a reversal of trends prior to the pandemic when enrollment was declining. While the enhanced FMAP shifts some state spending on this increased enrollment to the federal government, the sustained federal outlay growth in the quarters after the FMAP increase first took effect likely reflects overall Medicaid spending growth that is experienced at the state-level as well as the federal level. State spending growth during the pandemic likely varies across states based on economic conditions as well as the populations experiencing increased enrollment in each state (for example, increases in expansion enrollment would result in smaller increases in state spending due to the 90% federal match rate for this population).

The recent change in presidential administration has implications for the duration and extent of federal fiscal relief to state Medicaid programs during the pandemic, which will affect both state and federal Medicaid spending in the future. The enhanced FMAP provides federal fiscal relief that helps replace state spending, so federal Medicaid spending growth may continue to outpace state spending growth while the enhanced FMAP is in place. When the fiscal relief expires, federal spending growth will fall and state spending growth will increase sharply. Although the current PHE declaration expires on April 21, 2021 (which means the enhanced FMAP is slated to expire at the end of June 2021), the Biden Administration has indicated that the PHE will likely remain in place throughout 2021 and that states will receive 60 days’ notice prior to its expiration or termination. This announcement means that the FMAP increase is likely to continue through at least the end of March 2022. Further, Congress and the Biden Administration could act to further increase the amount and/or duration of the FMAP increase, an action that the Biden campaign had previously indicated support for. President Biden has already proposed expanding the FMAP to 100% for the administration of vaccine to Medicaid enrollees, a more narrow increase which would still likely shift additional Medicaid spending from states to the federal government.